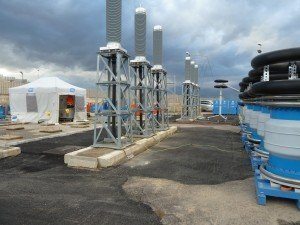 Proof of proper assembly and installation of cable systems is the primary consideration when carrying out on-site voltage testing of high-voltage cable connections.

The on-site AC voltage testing technology for high-voltage cables that is now used throughout the world was developed jointly by the Swiss Federal Institute of Technology Zurich (ETH) and FKH, and was introduced by FKH in the 1980s. It is based on the series resonance principle with tuneable frequency. Various other diagnostic methods, including partial discharge (PD) measurements in particular, are offered in addition to voltage testing.

Prior to commissioning a new cable system, or after the completion of major conversion work on an existing system, voltage 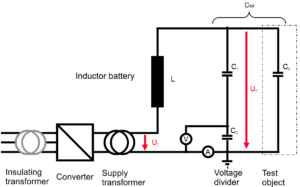 Diagram of a series-resonant system

testing is recommended before starting to operate the system. The aim is to exclude the following faults in particular: 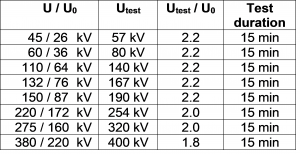 In compliance with CENELEC HD 632 and in divergence from IEC 60840 and/or 62067, FKH recommends that a higher test voltage should be applied to cables, but for a reduced testing duration. This recommendation is based on FKH’s lengthy experience of testing.

In the test circuit, an inductance L with a high quality factor is connected in series to the capacitanc Cx. Under resonance conditions, a voltage Up builds up over the test object that is considerably greater than the voltage UT of the supply transformer. The test frequency is obtained with the following formula:

Thanks to its modular inductances, the test system can be configured for a sufficiently high test frequency to ensure that voltage transformers do not reach magnetic saturation; this eliminates the need to remove them for the test.

Advantages over other methods

A partial discharge measurement is recommended as an additional measure for important cable sections and higher voltage levels. This involves specific inspections of the cable terminations and joints in order to identify insulation faults. In this way, it is possible to detect flaws that have not yet caused an immediate breakdown, but which harbour the risk of an unexpected insulation failure. 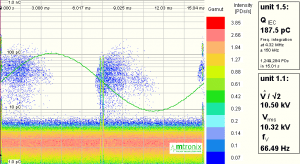 The modern partial discharge measurement instruments used by FKH allow synchronous measurements at different points. To capture all partial discharges simultaneously, fibre-optic (OWG) connections must be installed between all the sensors in advance.